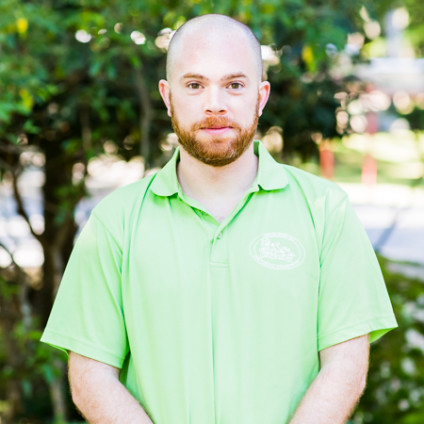 Many of the campers at Playland are absolutely enthralled by the presence of Playland Boy (and who wouldn’t be, with those muscles?), which makes this particular anecdote even funnier.  I work at Camp Playland, and in Summer 2013 I was asked to fill the role of Playland Boy while demonstrating the “bungee jump” special event to the campers.

At first, everything went great:  I was bouncing, kids were cheering, and everybody was happy.  But things quickly took a turn for the worse.  One by one, campers began yelling, “Do a flip!”  It got to the point where that’s all anybody was yelling, so I figured, “Sure, why not?  Might as well give it a try.  What could go wrong?”  Of course, I was thinking about how likely I was to find a way to injure myself (I’m great at that).  But that turned out to be a nonissue. As it turns out, doing a flip is pretty easy when you’re attached to four heavy duty bungee cables.

The problem, however, was that the Playland Boy costume is not exactly designed with acrobatics in mind.  All of a sudden, mid-flip, the head fell off.  The fact that I was upside down at the time didn’t serve to filter out the astonished gasps and screams from the crowd of campers, and before I knew what had happened Steve Bloom had dashed over in a panic to return my giant fake head.  But it was too late! To this day, I still hear accusations from campers that I “am” Playland Boy.

Somewhere out there, a video of this event is lurking – it was shot by Steve Bloom himself, so of course it ends with a panicked yell as the camera is thrown to the ground. (editors note: I found it, watch below).  To this day, I can’t watch the video without laughing.  And cringing a little.